The students in my course on Globalization have just finished their project on sourcing. A few looked at the companies that make some of their favorite jackets or shoes and tried to decode corporate double-speak and find the truth about how factory workers are treated. Others have offered the school more sustainable and just options for sourcing some of the clothing screened with our school’s name and logo. Lucky for me, the head of our student government is in my class and he has been inspired to change the company from which student groups and clubs buy their t-shirts and sweatshirts. Others in the class helped a company run by girls at the school select a supplier more in line with their values. Morale seems pretty high.

In reflective writing on the projects, many students considered the distance between themselves and those who make their clothes, shoes, and much else. How can this gulf be narrowed? Through social media? Education about the workings of the global system of production is a start, but it doesn’t lead to real contact. My students also ended up feeling stuck: what if turning away from companies like Adidas, Levis, and North Face, companies that pay so little to people in poor nations … what if this meant these poor people lost their jobs and tumbled further?

I don’t have an easy answer to this question, although I kid myself that my teaching is solutions-based. I am sincere about it, though: I feel I cannot blithely pass along a world of environmental collapse and obscene economic inequality to “the Millennials” without comment. They deserve to learn about the problems we are thrusting upon them. And, I believe it’s irresponsible to teach about climate change without also teaching about those making a difference. I also think schools should be models for just and sustainable behavior–though teachers know that institutions are less flexible than lesson plans.
For the time being then we are turning to considering ways to help the neediest on earth as directly as possible. This is not an academic exercise. In an article entitled, “Why Are Their Still Famines,” the BBC reported yesterday (23/2/17) that 100,000  people in South Sudan face starvation. Much is needed and little is coming:

“UN Secretary General Antonio Guterres has said $4.4bn (£3.5bn) in aid is needed from international donors by the end of March ‘to avert a catastrophe’.
“‘Despite some generous pledges, just $90m has actually been received so far,’ he said, which represents about two cents for every dollar needed.
“‘We are in the beginning of the year but these numbers are very worrying,’ Mr Guterres said. ‘In our world of plenty there is no excuse for inaction or indifference… There is no time to lose.’ …
“In the immediate term, two things would be necessary to halt and reverse the famine: More humanitarian assistance and unimpeded access for humanitarian agencies to those worst affected.”

Here is my current goal as a teacher: encourage my students to think about their place in the world and their ethical responsibilities within it. Second, I want to help them remove barriers between their current experience of being overwhelmed by famine, war, climate change, extinction, and, here in the USA, political catastrophe at the heart of the American democracy, and a life in which they feel connected and valuable. Heavy stuff!

In preparation, when we read Peter Singer’s words–some of which are included below–we understand that we can go online and participate in hedonism or idealism with a new immediacy and ease. What does this mean for us in the global 10% (which, I believe, includes all my students and myself) and for those at the bottom of the economic hierarchy?

I asked my students to watch Peter Singer’s Ted Talk and offered this passage from “The Drowning Child and the Expanding Circle,” from 1997.

“Today the assertion that life is meaningless no longer comes from existentialist philosophers who treat it as a shocking discovery: it comes from bored adolescents for whom it is a truism. Perhaps it is the central place of self-interest, and the way in which we conceive of our own interest, that is to blame here. The pursuit of self-interest, as standardly conceived, is a life without any meaning beyond our own pleasure or individual satisfaction. Such a life is often a self-defeating enterprise. The ancients knew of the ‘paradox of hedonism’, according to which the more explicitly we pursue our desire for pleasure, the more elusive we will find its satisfaction. …

“Here ethics offer a solution. An ethical life is one in which we identify ourselves with other, larger, goals, thereby giving meaning to our lives. The view that there is harmony between ethics and enlightened self-interest is an ancient one, now often scorned. Cynicism is more fashionable than idealism. But such hopes are not groundless, and there are substantial elements of truth in the ancient view that an ethically reflective life is also a good life for the person leading it.”

So we are turning toward what Singer calls “effective altruism.” This brings to mind Maslow’s Hierarchy of Needs.

Security and safety, the second tier, also seem like legitimate goals as well when sharing what you’ve been given. I am struck that the satisfaction we take in giving to charity is much higher on the hierarchy than the needs of those who receive our gifts.

Because there are so many non-governmental organizations and charities to choose from, I am asking my students to do some research through websites that evaluate such groups: Charity Navigator, Charity Watch, GuideStar, and GiveWell. Between now and when we meet again on Tuesday, I am requiring that they spend 45-60 minutes searching for 3 organizations that efficiently help in a meaningful way. Then I am asking that they answer these questions with a paragraph each: 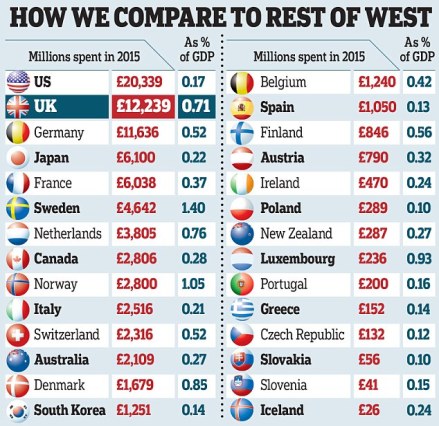 What is the best mechanism for keeping the poor alive and offering them ways to escape dire poverty? (Think governmental foreign aid, NGOs, etc.) Explain your answer.

Given the fact that the US is not near the top of the pack in per person foreign aid, what do you think ordinary citizens should do to help? How much should wealthy countries give? (Note the US is far below it stated goals.) How much should individuals give?

Importantly, my students know I don’t have answers to these questions. I think we should all try to help, but I have no idea how much. Should we feel a sting of sacrifice? Is it better to give what they can now or should my students pursue wealth with the plan of sharing much more later in life? Or should they work directly on a pressing issue for humanity?

For Wednesday, each student will offer a 1-minute pitch, presenting a group that they believe would do real, meaningful good with a donation of as little as $10. Then, for Thursday, I have assigned a one-page essay on the responsibilities of wealthy global citizens (meaning them) to aid the poorest. How? How much?

I feel like I am being honest with my students. They have known they are privileged for a few years. Now we can talk about what to do with some of that unearned power. Next year at this time they will be off at university or enjoying a gap year. Before they go in the broader world, I hope to begin a habit of sharing the gifts that come with birth in the global North. $10 might indeed save a life and we all have $10 to spare. Just now we have time to think about what that means and how best, for each of us, we might proceed.

Recent Posts at: THE BIGGER PICTURE: Educating Students for the Globalized Present

Is Our Goal Obedient, Professional Teenagers?

Designing a Unit on Climate Change (While California Burns)

Something has changed. Yes, climate change is now “current events,” not a coming attraction. But something else, something more interesting, has changed. My students. They are first-year students in secondary school, mostly 14-years old, the Class of 2023. Since our current unit on climate change policy began six weeks ago, they have exhibited a number […]

Education and Trust: Finland and the USA

Three years ago, at the end of my family’s time in Finland, Mika Rantala, then the Head of school at Schildt Upper Secondary School in Jyväskylä, asked me to record a brief video on my reflections after visiting numerous Finnish schools, meeting with teachers, administrators, and students. Having visited many Finnish schools at all levels and […]

An Attempt at Measuring “Class Participation”

I have long been unhappy with the subjective nature of my assessment of students’ class participation. Earlier in my career, I simply equated asking and answering questions with successful participation. I also included trips to office hours. But it was clear I was privileging one kind of student: the kind that is assertive, confident, and […]

In the New York Times last Sunday, David Wallace-Wells offered an essay on climate change entitled, “Time to Panic.” We have been downplaying the risks of our situation, Wallace-Wells argued, for psychological and political reasons. Now, as he quotes David Attenborough, “If we don’t take action the collapse of our civilizations and the extinction of […]

I wonder: when is my teaching helping to shape ethical, thoughtful, happy human beings? When am I (doing a good job, maybe) teaching to fulfill the demands of the market, of corporate future employers, of educational fashion, of the latest branding initiatives of influential schools? I have written here before about the dangers of so-called […]